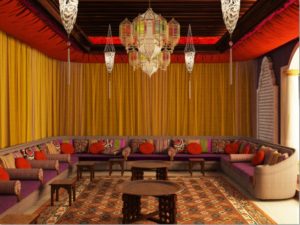 “Al Majalis Madaris” says the Arab proverb, meaning “the Majalis are schools”. The Majlis, singular of Majalis, literally means “space where we sit”, an assembly or a council. This traditional practice, widespread in the Arabian Peninsula, consists in gathering a group of people in a host’s Majlis. In that region, the Majlis is fully part of social life, a manifestation of solidarity and hospitality between hosts and visitors. Within communities, it is a privileged place of discussion, transmission of knowledge and familial stories, receptions for happy or sad ceremonies. The Majlis very often belongs to a person playing a significant social role, the leader of a community or a principality or a Cheick for instance. Generally, the host tend to receive demands from the guests and try to answer them depending on his influence.

The location, furnishing and functioning of the Majalis are based on traditional legacies tinged with modernity. The diversity of the Majalis, depending on the environment and function, is evidence of local adaptation of an ancient practice that is common in the Peninsula. Today, as a result of a joint initiative of the United Arab Emirates, Saudi Arabia, Oman and Qatar, the Majlis is listed as an intangible world heritage in the UNESCO’s list, symbolizing intercultural dialogue.

The leaders of communities pay a specific attention to the construction, furnishing of the Majlis, in their palace, house or tent for nomads. In the last case, the Majlis can be built in the shadows of Acacia trees and surrounded by leaves from three sides to protect the visitors from wind and sand. The participants usually sit in the open air around the fire, coffee jars and pots. In the Majalis of tribe leaders and merchants, the furniture is much more luxurious. In an important Majlis, one person is charged of preparing the Arabic coffee, the Muqahwi, helped by the youngest members to serve coffee to the guests. Widespread in the Arabian Peninsula, the Majlis takes different forms and functions depending on the environment and the usage of the gathering place. First, there are three types of Majalis in the region. For instance, there are Majalis for people in costal areas. Those ones are traditionally made of plaster and mud, and sometimes a boat can play the role of the Majlis. The communities are gathering there to discuss fishing, diving and pearl trade. In the desert, the Majlis takes two forms: either an open air gathering around a fire or a Bayt Al
She’r, that takes place in a tent made of goat hair. The Bedouins usually exchange on their daily life matters and stories. In mountains, the Majlis is generally organized around a water source and holds discussions on the community share of resources such as water and pastures. Furthermore, the diversity of the Majalis reflects the different functions they can be used for. In that sense, there are three main Majalis according to their function. First, the merchants Majlis is a tool for fundraising and pearl price negotiations during the diving season. Second, the Majalis of justice are dealing with the disputes regarding the merchants’ affairs before respected judges. Third, the Majalis of the Elders are the ones where guests gather in a Cheikh’s place seeking company or advice for instance. One should notice that during the Ramadan period in many neighborhoods to share moment of conviviality with family and friends. Besides, the women have their own Majlis for intellectual gatherings for instance. More generally, the Majalis are also places for entertainment and recitation of poems, stories and popular tales.

The Majlis tradition has been existing in the Arabian Peninsula societies for centuries. Nowadays, several countries give a common value to this heritage of the Arab world even though they name this tradition in different ways: the Diwaniya in Koweït, Majlis in Saudi Arabia, the Barza in the UAE, al Sabla in Oman and al Mayles in Qatar. Given that common interest, an international initiative led by the last 4 countries mentioned above proposed to recognize the Majlis as a social and cultural space and a heritage to preserve. This suggestion paved the way for the official designation of the Majlis as a UNESCO world heritage in 2015. In 2018, the UNESCO hosted an exhibition about the Majlis, perceived as a showcase of the intercultural dialogue and the crossed influence of the Muslim, Christian, Jewish and Buddhist cultures.

With the official designation as UNESCO world heritage, the international community gave a specific recognition of the Majlis’s value. Across the history, The Majalis have always played a significant role in the socio-economic dynamics of diverse communities in the Arabian Peninsula. In that sense, The Majlis is a heritage transmitted from a generation to another, a place of learning and socialization for the youth. In fact, the youth tend to become more and more essential in the running of the Majalis, especially with the introduction of modern technologies in the furnishing of these spaces. They learn to listen, negotiate, resolve disputes and assimilate the community’s values and be entertained. It is in that perspective that the Arab proverb “Al Majalis Madaris” (“The Majalis are schools”) takes on its full meaning, a saying that reveals the richness of the Arab language and poetry.